Other Articles in this series

In our academy article - AWS EBS vs S3 vs EFS, we introduced the three storage services provided by AWS. We have already covered S3 and EBS services in our last two academy articles and now let’s dive into AWS EFS in this one!

EFS (Amazon Elastic File System) is a file based storage service from AWS. EFS provides a simple, serverless, set-and-forget elastic file system. It is scalable so removing and adding files makes it grow and shrink automatically. Many instances whether on AWS or on-premise can be attached to EFS. It allows for persistent storage and secure sharing of data.

In this article we will not only cover how to set up an EFS, but we’ll also see how you can access EFS from instances in a different VPC. 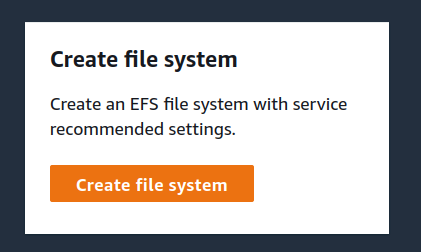 In this section, we will create an EC2 instance with Ubuntu as the OS in a VPC that is different from where the EFS was created. We will use the EFS Mount helper which is part of the amazon-efs-utils set of tools.

a. Create a directory in your EC2 Instance using the following command:

This way you can create multiple instances in different VPCs and mount the EFS file system to those instances.

EFS provides persistent storage and is somewhat like the Network Attached Storage (NAS) that we use. This article provides a step-by-step walkthrough of how you can create an EFS file system. It also covers how you can access EFS from your EC2 instances in a different VPC.